Dr. Niel Micklem has passed from this life.

Home Dr. Niel Micklem has passed from this life. 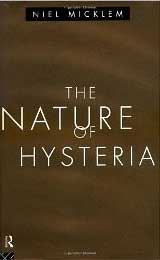 Dr. Niel Micklem died on December 9th,.  He was ninety-one and was in frail health in his last years.  He was an esteemed Jungian Analyst.  He will be remembered by many people for his uncanny ability of listening to the psyche.   When I would go back to England to visit him, and Rosemary Gordon, in the last decades of the last century, I found that he was regarded by some as the “Dean” of the Jungian Analysts in England.  He did transcend any one of the four schools of Analytical Psychology in England.  He is noted for his magnum opus, the small volumn on the history of Western medicine from the point of view of the psyche and the changing names for diseases given to this dimension over the centuries.  It is THE NATURE OF HYSTERIA, London, Routledge, 1996.  He had been prior to that date been in psychiatric practice in Zurich and had been a training analyst there.  I met him in the 1970’s in London, in Harleigh Street at the suggestion of my friend, Dr. Rosemary Gordon.  He became for me one of the outstanding analysts I worked with, one of my most important teaches, and in later years, a close friend.  Many of you will remember my speaking of him in the most cherished regard.

His funeral, a Requiem Mass, was celebrated on Friday, January 4, 2013 in St. Peter’s Church, Winchester.

Some of Niel’s articles and lectures included the following:

REFLECTIONS ON THE ARCHETYPE OF IMAGE. [a study of Meister Eckart and     C G. Jung]

2.     Self Knowledge and the Opus Therapeuticum.

THE SHADOW OF WHOLENESS.

PSYCHOLOGICAL WEAKNESS AND ITS DEBT TO THEOLOGY.

I am sad to hear of the death of Niel Miklem. He was Adolf’s honorary secretary in the IAAP from 1980-1983, and I was second VP at the time. We worked closely together and always had a good relationship. He also shared an office with Adolf at 1Untere Zaune in Zurich. He was an excellent analyst and was an excellent secretary to Adolf. He was also a wonderful musician and played a decent cello. Although he was very British in his manner, my wife Jean danced with him at one of the Congresses and he really warmed to the situation.

This is indeed sad news.  I learned an enormous amount from Dr Niel Micklem when he was my supervisor during my training.  He was part of that extraordinarily creative generation who were in Zurich in the early 70s which included, among others, Hillman, Lopez-Pedraza, and Guggenbuhl.  They differed from each other in many ways but what they shared was a powerful focus upon psychic image as central to psychology.
Micklem didn’t write a great deal, but what he did produce was always deeply thought and well worth reading.  His exegesis of the Demeter-Persephone myth in his book on the nature of hysteria remains masterful.
As well as the papers mentioned by David Roomy he also wrote ‘The Delusion in Analytical Psychology’, ‘Abaissement du Niveau Mental: a Paradox of Psychotherapy’ and one of my favourites, ‘A Matter of Life and Death,’ which looks at image via Meister Eckhart, the Trinity and Dionysus.  Micklem writes here with great sensitivity around some of his favourite topics: illness, death and paradox.
He will be much missed by those who encountered him and benefited from his acute intelligence and wisdom.
Best wishes, Mark Saban
[hr]
Dear Friends and Colleagues,

I am forwarding this sad news. Niel was a fine man and an excellent analyst. I was in a case discussion group in London with him for 13 years. The members came from all the Jungian traditions and, in addition to Niel and me, were Giles Clark, Sheila Powell, Bani Shorter and Mary Williams. The group was called The Saplings. It was wonderful.