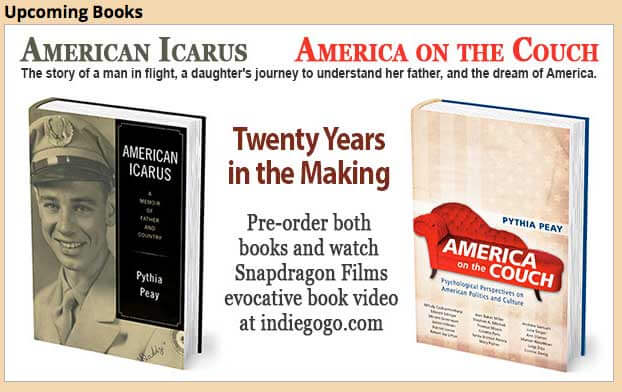 Greetings. My name is Pythia Peay, and I am a depth journalist and the author of two new books: American Icarus: A Memoir of Father and Country, is a psychobiography of my father, Joe Carroll, and his epic American life as a flier, farmer, dreamer, incurable alcoholic, and his redemptive death. America on the Couch: Psychological Perspectives on American Politics and Culture, is a collection of interviews with Jungian analysts and psychologists on the deeper, archetypal American psyche. My publisher, Martin Rowe of Lantern Books, has elected to get these two ambitious works (twenty years in the making) into print through a crowdfunding platform, Indiegogo. Below is the letter in which he explains how these books came to be, why we are turning to Indiegogo, and why you might be interested in reading them.

Many thanks for your time, and happy holidays,
Pythia Peay
www.pythiapeay.com
http://www.indiegogo.com/projects/american-icarus-and-america-on-the-couch-two-new-books-by-pythia-peay

My name is Martin Rowe, and I am the publisher at Lantern Books, which distributes Chiron’s titles. I’m writing to you because Lantern is hoping to publish a couple of books that you might be interested in reading. My apologies for this long and unofficial email, but I need to tell you a story.

Shortly after Lantern began in 1999, a journalist and psycho-biographer called Pythia Peay (http://pythiapeay.com/) sent me a 600-page manuscript of interviews with 25 of the leading Jungian and archetypal psychologists of the day (Edward Edinger, James Hillman, Ginette Paris, Sylvia Perera, Murray Stein, etc.) on what ails America: Why is it seemingly so committed to violence? Why has it such a troubled relationship with its own immigration myth? Why are we so forgetful of the past? And so on. I thought the interviews fascinating, but the book was too big and our company was too new to be able to handle such a project.

Before I returned the manuscript, I told Pythia that one element of the book really stood out, and that was the introduction, which told in brief the story of Pythia’s father. Joe Carroll was an aviator, a literal and metaphorical flying boy. With his head in the clouds, this American Icarus embodied all that was aspirational and attractive about mid-twentieth-century America, with its confidence, bravado, and its belief that the only way was up. But Joe was also an alcoholic, who only on his deathbed finally reconciled himself to the truth that our bodies (even that of the body politic) are pulled by the gravity of life toward the earth and the family whom we abandon but, ultimately, must return to. It is here, in the ground of our beseeching, that the work of the soul takes place.

I told Pythia that Joe Carroll was the heart of her book and that she should tell the story of America’s soul through his life. She went awayand TEN YEARS LATER returned with “American Icarus,” a brilliantly evocative, compassionate, and profoundly American story of the boy who flew too high and the man who fell to earth. “American Icarus” reminded me of one of those big soul-books of the 1990s, like “Women Who Run with the Wolves,” that dared to take their time as they entered the psychic underworld to listen to the ancestors and envision the homeland’s future through the mirror of the past. So good was “American Icarus” that I thought a large publishing house might take it, and give Pythia the advance that she so deservedand we couldn’t afford.

But, as many of you know, these days you need to have a marketing and publicity platform before a large publisher will look at you, and three years more went by as Pythia was enthusiastically received by agents and some editors, only to be told that there was no market for such a book—that she wasn’t famous or plugged-in enough to make it worth their while.

Thankfully for “mid-list” authors like Pythia, the publishing landscape has changed. Through platforms such as Kickstarter and Indiegogo, readers can invest in projects like Pythia’s and make what was impossible, possible. Lantern recently collaborated with the Canadian photojournalist Jo-Anne McArthur to produce a beautiful hardcover book of photographs called “We Animals” (http://www.indiegogo.com/projects/we-animals-the-book/x/229472). We’re now doing that for “American Icarus” and “America on the Couch.” You can find the details at http://www.indiegogo.com/projects/american-icarus-and-america-on-the-couch/x/229472.

I hope you will take the time to look at these two books, and perhaps pre-order one or both of them. If you do, or you don’t, please know that Lantern will not be emailing you in the future about these or other Lantern books.

Thank you for your time and happy holidays,