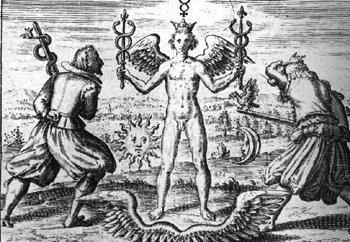 It is our pleasure to introduce our first presenter for the seminar on Myths and Fairy Tales and their resonance today. Mathew Mather is a recent PhD graduate from the University of Essex, having written his thesis on The alchemical Mercurius: esoteric symbol of Jung’s life and works. Mathew was born in Mtoko, Zimbabwe but grew up in South Africa. Some years back he relocated with his family to the Nire Valley in Ireland. He lectures in Creative Multimedia and is course leader for the ‘Certificate in Jungian Psychology with Art Therapy’.

We are very excited to post Mathew’s paper and to invite the membership to begin the discussion about the fairy tale the ‘Spirit in the Bottle’, Jung’s assessment of its symbolism, and its resonance today.

Spirit in the Bottle

Once upon a time there was a poor woodcutter. He had an only son, whom he wished to send to high school. However, since he could give him only a little money to take with him, it was used up long before the time for the examinations. So the son went home and helped his father with the work in the forest. Once, during the midday rest, he roamed the woods and came to an immense old oak. There he heard a voice calling from the ground, ‘Let me out, let me out!’ He dug down among the roots of the tree and found a well-sealed glass bottle from which, clearly, the voice had come. He opened it and instantly a spirit rushed out and soon became half as high as a tree. The spirit cried in an awful voice: ‘I have had my punishment and I will be revenged! I am the great and mighty spirit Mercurius, and now you shall have your reward. Whoso releases me, him I must strangle’. This made the boy uneasy and, quickly thinking up a trick, he said, ‘First, I must be sure that you are the same spirit that was shut up in that little bottle’. To prove this, the spirit crept back into the bottle. Then the boy made haste to seal it and the spirit was caught again. But now the spirit promised to reward him richly if the boy would let him out. So he let him out and received as a reward a small piece of rag. Quoth the spirit: ‘If you spread one end of this over a wound it will heal, and if you rub steel or iron with the other end it will turn into silver’. Thereupon the boy rubbed his damaged axe with the rag, and the axe turned to silver and he was able to sell it for four hundred thaler. Thus father and son were freed from all worries. The young man could return to his studies, and later, thanks to the rag, he became a famous doctor (paraphrase of Grimm’s ‘Spirit in the Bottle’; Jung 1943/1948: 193-4).

‘The Spirit Mercurius’ was initially delivered by Jung as two lectures at Eranos in 1942 (1943/1948: 191). The first lecture is an interpretation of Grimm’s fairytale ‘Spirit in the Bottle’. The second lecture is a more general thematic compilation on the figure of Mercurius.

Concerning the first lecture, Jung admonishes the reader that his treatment is a ‘general survey’ and that it makes ‘no claim to completeness’ (footnote, 193). What follows is a fairly detailed analysis of the fairytale. Toward the beginning he enticingly states that this German fairytale “contains the quintessence and deepest meaning of the Hermetic mystery” (195). He then proceeds to interpret it as a transformation mystery whereby the boy, lost to the world, enters the darkness of his unconscious and is led by a strange calling. He goes to the very ground and root of his being and there discovers a calling of a numinous being bottled up within the physiology of his body. Releasing this chthonic spirit resulted in him almost losing his life. Fortunately though, by virtue of his wits, there is a favourable resolution for both himself and the spirit.

Jung effectively portrays the fairytale as a timeless archetypal mystery applicable to a multitude of historical and cultural contexts, as a paradigm of psychospiritual transformation and renewal. On another level, he also locates the story within the Western Christian tradition by interpreting it as a cultural evolution at a particular stage of individuation. From this point of view, he identifies the magician or alchemist with the Christian God and the spirit in the bottle with the quintessential pagan God as the ‘serpent of paradise’ in the garden of Eden. In this sense God ‘banished’ the pagan spirit which gets bottled up and hidden in the depths of matter.

Such a theme is central to Jung’s broader critique of modern Christianity as it portrays a ‘split archetype’ into instinctual and spiritual polarities. The instinctual, bottled and buried, gets contaminated with the feminine, pagan and malefic; whereas the spiritual conflates to the masculine, Christian and benevolent. Thus, in his opinion, such a split has resulted in a specifically Christian wound as reflected in such narratives as the grail legend, and as portrayed in the dreams and psychopathology of his patients. In this context, the spirit Mercurius is portrayed by Jung as a dynamic and compensatory figure to the collective consciousness of Christianity (245).

He further clarifies that it would be incorrect to equate the alchemical Mercurius with the Devil. Although essentially a dark and chthonic god, he opposes dogmatic definition and opposition at all costs: a real trickster who “drove the alchemists to despair” (203). He then relates that releasing the spirit Mercurius is alchemically incorrect. The more usual procedure would be to keep such a spirit bottled up and to transform him by means of various alchemical procedures (203). In this context we also witness an earlier work ‘Wotan’ inflected as the spirit Mercurius – the ‘awakening of the blonde beast’ in the German soul. He explicitly identifies the spirit Mercurius with Wotan, national pagan god of Germany, but offers no expansion of the topic (198).

In summary two themes emerge, as well as intimations of a third. The first interprets the fairytale as a personal encounter with the daimonic within the conceptual framework of analytical psychology. The second touches on the notion of a cultural individuation of the Christian religion. A third more tacit theme concerns political context; of particular interest considering the lecture was delivered in the midst of World War II.

Moving to the second lecture (a good example of Jung’s problematic writing style) we get a monologue on Mercurius arranged thematically around a number of categories. He utilizes a fairly vast array of text citations to “draw a picture of this versatile and shimmering god” (204).

In the midst of this lecture, in seeming exasperation, he notes that “the concept swells dangerously and we begin to perceive that the end is nowhere in sight” (211). Its confounding properties, seemingly de-coupled from the substance itself, lead him to the conclusion that it is a projection of the unconscious. Finally, toward the end of this lecture, he attempts to ‘pin the concept down’ by means of a 6 point summary:

(1) Mercurius consists of all conceivable opposites. He is thus quite obviously a duality, but is named a unity in spite of the fact that his innumerable inner contradictions can dramatically fly apart into an equal number of disparate and apparently independent figures.

(2) He is both material and spiritual.

(4) He is the devil, a redeeming psychopomp, an evasive trickster, and God’s reflection in physical nature.

(6) As such, he represents on the one hand the self and on the other the individuation process

and, because of the limitless number of his names, also the collective unconscious (237).

He then ends by further elaborating the relevance of the spirit Mercurius in relation to Christianity and contemporary times. For example, he highlights this figure as having “the very qualities we so urgently need to heal the split in ourselves” (246).

Such a notion takes us into the very heart of what we might consider Jung’s ‘alchemical myth’. Von Franz, in a dramatic moment in the film Matter of Heart, clarifies key features of such a myth.

Concerning clinical aspects and the fairytale ‘Spirit in the Bottle’ Hillman writes: “Psychotherapy has made this tale a root parable” (Hillman 2010: 294). Arnold Mindell, for instance, uses this fairytale to clarify his dream-body concept (see chapter 5 in Mindell 1985/2002). ‘Spirit in the Bottle’ has also been the subject of many a Jungian lecture/workshop (curiously, the explicit title Mercurius has eluded article publication).

Regarding the second direction we might query the relevance of Jung’s alchemical myth for our contemporary times. To do justice to such a theme we should also consider Jung’s belief in a transition of astrological Ages, and his interest in the grail legend.

My recently completed PhD thesis involved a weave of Jung’s views on alchemy, precessional astrology and the grail legend in a life myth construction. Intrinsic to such a perspective is Jung’s belief that religious history (and its undercurrents) constitute a ‘transformation of the God-image’ synchronistic with a meta-narrative scripted by the precession of the equinoxes through the astrological Great Year.

I am also aware of the ‘problem’ many post-Jungians have with the more esoteric side of Jung (such as astrology). My claim is that such ‘secret knowledge’ is key if we are to better understand works such as The Red Book,Aion and Mysterium Coniunctionis.

Overall, in addressing this topic, a hoped for impact would be a revitalised interest in ‘original Jung’. A drifting away from the ‘big thing’ of his oeuvre has been voiced: “If one looks around in today’s Jungian world, one gets the strong impression that Jung’s heritage has been forfeited … the psychologist has got out of the magnum opus (or has never had access to it)” (Giegerich 1999: 81).

As further stimulus for discussion I include a few excerpts relating to Mercurius.

For the time being I am still immersed in Mercury who, as he will always try to, has dissolved me almost and just failed to separate me limb from limb” (footnote 5, in Jung 1973-75: 319).

It might be said that the secret of Merlin was carried on by alchemy, primarily in the figure of Mercurius. Then Merlin was taken up again in my psychology of the unconscious and – remains uncomprehended to this day!” (Jung 1963/1995: 255).

John Hill has contributed a response to the wonderful ongoing seminar led by Mathew Maher and in response to Mathew’s paper about “The Spirit in the Bottle”. In his response, John mentions his much longer essay about his ongoing work with Fairy Tale Enactment. You will find John’s essay in JUNG AND MORENO: ESSAYS ON THE THEATRE OF HUMAN NATURE, to be published by Routledge in July 2013. Here’s the link so you can visit the Routledge webpage for our book:

Thanks for taking a look.